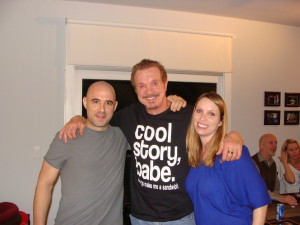 Hanging with DDP in Atlanta, GA

In December of 2011 I sent Diamond Dallas Page a message via Facebook to see if he had any interest in coming on to my radio show to promote DDP YOGA and to challenge listeners to set their own goals to strive towards. After a few correspondents from Doug and Steve from DDP YOGA I was informed that Dallas would be giving me a call on New Year’s Eve to talk about this partnership.

On December 31, 2011 I received a call from DDP and we talked for roughly an hour about my goals and how I would be able to benefit from adding DDP YOGA to my Brazilian Jiu Jitsu training. After several weeks of doing DDP YOGA and posting photos of my results, I was flown out to Atlanta, GA to hang with Dallas and shoot an interview for an upcoming DDP YOGA infomercial.

In the Kitchen with Diamond Dallas Page