So I had the opportunity to be backstage during a WWE HOUSE SHOW tonight in Bloomington, Illinois where I met the Uso Brothers as part of a meet and greet contest with listeners of the radio station that I work for.  During our wait, I had a blast talking with the listeners and reminding them to use #WWEBLOOMINGTON as well as the Hash Tag created for the radio station contest that we were using as part of a WWE Contest we were wrapping up during the event.

END_OF_DOCUMENT_TOKEN_TO_BE_REPLACED

In December 2011 I jokingly sent out a message to Diamond Dallas Page via Facebook that “if this really is DDP, I’d love to have you on my show to talk about DDP YOGA and setting Goals for the New Year”.

It turned out that DDP does indeed run his own Facebook page and after a few messages back and forth, DDP gave me a call on December 31, 2011 to talk about the goals that I had posted for 2012. One of the things that DDP liked about my goals was that I wrote them down AND made them public. I’ve been doing DDP YOGA ever since, adding it to my Brazilian Jiu Jitsu training and I was even invited out to Atlanta, Georgia in 2012 for a DDP YOGA success story get together.

Since then, I have posted the goals that I have for the year, and while I may not knock all of them out over the year, I strive to achieve as many of them as possible.

I’ll be updating the GOALS SECTION of my site as the year goes by so if there is something that YOU want to Accomplish this year, like my pal DDP says “Don’t THINK it; INK it!”

I wouldn’t be setting the right example if I did not follow up on my first blog concerning the bullying issue.

The following night Molly took Breanna to her gymnastics class while I stayed home with Kelsey.  When they returned home, Breanna came up to me and informed me that she wanted to tell me something that had been bothering her since the night before.

She told us that SHE was the one that called her friend names and that she wasn’t bullied into doing it. She said that at the time, she felt if she blamed someone else, we wouldn’t be mad at her.  Then she said that she realized that she hurt two people and even got the other girl in trouble.

I commended her on her coming forward with the truth and asked her if she felt better, but she shook her head “no’ and started to cry.  She said that she wanted to go and apologize to the other girl that she blamed.  After dinner Molly took her over to the girl’s house and spoke with her dad and the girl, informing them that she made up the story and that she was sorry that it caused the girl to get in trouble.

The girl’s father told Breanna that he too was very impressed and proud that she had come forward with the truth and that it is a hard part of growing up.  We all agreed that it would be best to give the girls some space and they could start playing together after the holidays.

Breanna has been grounded, but I’m happy that she came forward with the truth as quickly as she did.  Hopefully she has learned from this experience.

Tonight we needed to address a situation concerning my 5-year old daughter getting bullied into bullying a friend of hers.

There is an older girl that lives near us that plays with Breanna from time to time as there aren’t that many kids in the area.  Well today this older girl bullied Bre into calling her friend names, even after Bre kept saying she didn’t want to.  The older girl said that she would stop playing with Bre and wouldn’t invite her over anymore.  My daughter finally gave in to the peer pressure and started calling the boy names while they waited for their ride.

To make things even worse, this boy is a friend of the family and one of Breanna’s best friends.  When she saw me she was crying and telling me how bad she felt for making fun of her friend.  We spoke to the boy and he said that it was Breanna’s older friend that was telling Breanna what to say and how she would’t play with Breanna or invite her to her birthday party if she didn’t say it. END_OF_DOCUMENT_TOKEN_TO_BE_REPLACED 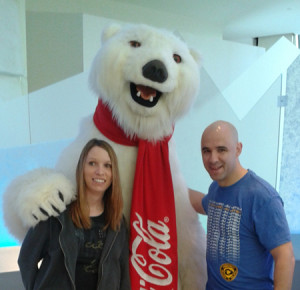 Now if you do not know me, I would like you to know that my amazing wife kicked the shit out of her Breast Cancer after she was diagnosed at the age of 28 in December of 2012.  This month is a huge month for us as it marks  FIVE-YEARS of REMISSION since her recurrence just six months after we welcomed our first child into our lives.

Molly is the strongest person I will ever meet as she never once complained about her situation.  She simply set her mind to beating this nasty disease so she could take her little girl shopping for dresses she’ll need for all of the school dances she’ll be going to as well as that ONE wedding dress.

Now Breanna is Five and she has a little sister Kelsey, who is Two.  There’s a lot of dress shopping and days at the beauty shop getting their hair  and nails done. END_OF_DOCUMENT_TOKEN_TO_BE_REPLACED