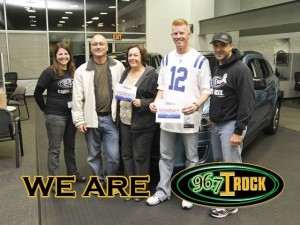 96-7 I-ROCK capped  off our Indianapolis weekend getaway with O’Brien Mitsubishi in Normal, Illinois on Wednesday October 16, 2013 with Mary Forbes of Bloomington winning the weekend getaway.

I’m always trying to come up with different ways to giveaway large prizes and after 12-years in the business, I was pleased to hear that this giveaway was won of the best ones from start to finish.

The concept was simple:  Allow listeners to text the various keywords that were given out over the airwaves as well as sign up through our on-line database and join us at Qualifying Broadcasts during the Five-Week long promotion.

150 license plates were designed (50 from Illinois, Indiana, and Colorado) to help determine who was going to Indianapolis for 3 days that included tickets to Sunday Night Football; The Colts hosting Peyton Manning and the Denver Broncos.

Once the plates were designed they went into a drawing with the one plate coming out as the winner.  A photocopy was made of this plate and placed into an envelope for the finale of the promotion.  As listeners checked in, they were given their corresponding number and we drew numbers out of a pail which allowed them to go to one of three Outlander Sports to select a pizza box.  We had taped a license plate in each box and the plates were all vanity messages; without any of them having “WINNER” on them.  This design was done to ensure that no one opened their box and ended the giveaway early.